This week's featured author is Kay Merkel Boruff from Dallas, Texas and her memoir Z.O.S. 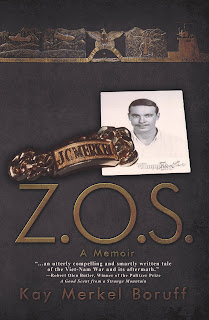 
1. What message are you hoping people will receive when they read your book?


In Z.O.S. the reader will find messages of loss, death, and dying, as well as complementary messages of joy, hope, and optimism. I began to study Buddhism before I went to Southeast Asia in 1968. In the Tao Te Ching, yin/yang or “dark-bright” “negative-positive” demonstrates how opposite or contrary forces are complementary, interconnected, and interdependent. I embrace both the dark and the light. I hope readers “suspend their disbelief” and embrace both the dark and the light when reading my book.

One reviewer said, “Z.O.S. is a love song for survivors.” I hope readers receive the message of love.

I wrote Z.O.S. to encourage people, especially women—you can screw up and still go on. You can buy a comp book from Wal-Mart and write your life. You can fall off the horse and get back on and help someone else along the way.

Flying home from Thailand, to bury my husband, I looked down at the New York Times front page headlines glaring from the coffee-stained table in the Frankfurt airport:
“CIA Pilot Killed: First Casualty Plain of Jars”
The CIA pilot was my husband Jon Christian Merkel. Hours earlier, in the Air America office in Bangkok, I was instructed not to discuss Jon’s death with anyone. A fellow passenger, who knew I was an Air America wife, asked, “Anyone you knew?” I replied, “A friend.”
Ten years later I found out the passenger was a journalist who had interviewed me.
Earlier in Udorn, Thailand, before my departure, packing my household goods to go home, I was met by a scream from my friend’s son—“A snake just bit Peter.” The doctor at the Base ER who treated the child was a sorority sister’s brother. The year before, I attended a Thai friend’s nephew’s funeral and threw lighted twigs on his body in the blazing funeral pyre at the Buddhist Temple. Another time I went snorkeling near the Tiger Cages on Con Son Island off the shores of Viêt-Nam one Sunday afternoon. A stripper danced on the dining room table at my husband’s Captain’s Party. In the “count every baht” period in Bangkok, I washed sheets in the bathtub and rode un-air-conditioned Thai buses for 3 baht to mail my daily letters to Merk. Later I dressed in Thai silk and Laotian gold jewelry after Merk made Captain for Air America, and I zoomed around Sai-Gon in my new 1968 red Honda car.
On February 18, 1970, my 24-carat life was shattered when Jon was killed flying in Laos. I returned to Texas, a CIA widow with PTSD.

“After learning of Merk’s death, I drove with friends to our bungalow, in silence, strange optimistic silence. Somewhere in the back of my mind, there was the shimmering of a crack. Small. Quiet. Cloisonné weblike cracks. A hair-like thread spun as sugar over a flame, a thread of spiderweb neutrinic strength.”

I wrote Z.O.S. to introduce readers to an Air America wife’s life—Sex Blood Money and the CIA in Southeast Asia—a life of hopes and dreams, love and loss, and joy and hope. I wrote to encourage readers to find inner strength in the face of adversity.

3. What has been the hardest part of the publishing process?

The hardest part of the publishing process was finding a publisher. After searching for several years, I found Black Rose Writing, a small independent publisher. Then editing and formatting my book was an equal nightmare. I have epigraphs, footnotes, pictures, a glossary, and diagrams and figures, each with its own font size and formatting issues.

My writing “wraps” or connects like a necklace, i.e., each chapter’s first sentence “connects” with the last sentence—much as the first scene and last scene in a movie connect.

Then “beads” or leitmotifs are strung on the necklace. Leitmotifs such as gold, red, and foreign words are placed on the necklace. Each reference, such as a gold ID bracelet or gold leaf on a Thai temple or red cai blossoms or red tiles on a wat (small temple) or klongs (Thai canals) or kamoys (thieves), creates a “bead.” Then a second reference generates a flashback for the reader. A web is spun, connecting the “beads,” to keep the reader engaged.

Finally, the story, interwoven with flashbacks, spirals forward into the future.

The reader is immersed in a genre-bending memoir of “magical realism.”

4.  What has been the biggest (pleasant) surprise in your publishing journey?

The Black Rose Writer acquisition author who discovered my book ended up writing the synopsis on the cover.

Z.O.S. is a memoir of Sex Blood Money and the CIA in Southeast Asia. Kay Merkel Boruff tells the story from her perspective of wife and widow of an Air America pilot killed during covert operations in Laos. She takes the reader there as only one who has been there can. You experience the highs, understand the efforts to escape the constant fear of the dangerous reality these American heroes face daily, feel the anguish of her loss and the isolation of the “zone of silence” she is required to live in for the rest of her life.
Kay Merkel Boruff, a teacher at The Hockaday School 1973—2010, studied with Naomi Shihab Nye, Li-Young Lee, Tim O’Brien, Madeleine L’Engle, and Robert Olen Butler.
She unveiled the Air America Memorial at UTD with CIA Director William Colby. She attended Burning Man and climbed Wayna Picchu, chasing another adventure in her “zone of silence.”

Another surprise in my publishing journey was discovering my book had been made into an audio-book. I contacted the reader and was pleasantly surprised to find he enjoyed recording my book. He said, “Even though the book was nonfiction/prose, it read like poetry.” A published poet friend said the first chapter read like “poetry.” As a poet, I value those critiques.

A final surprise was joining the Black Rose Writing Authors—a talented and compassionate international band of writers eager for you to succeed and generous with supportive suggestions.

5. Would you write a sequel to your book? Why or why not?

Yes, I am writing a sequel to my book titled “Green Parrots, Chocolate Soufflé, and Rocks in my Pockets.” I have more stories and new essays about my life in Southeast Asia and my life today that I want to see in print for readers to enjoy.

6. What author or book has influenced your writing?

Robert Olen Butler and his Pulitzer Prize-winning book A Good Scent from a Strange Mountain are major influences on my writing. Robert is a cornerstone in the group of Viêt-Nam writers. I studied with Robert in France where he applauded my work and became a dear friend. Then he wrote a blurb for my book—
“From a rare and resonant point of view, Kay Merkel Boruff’s memoir offers an utterly compelling and smartly written tale of the Viêt-Nam War and its aftermath. Z.O.S. is a necessary work for a full understanding of the human toll of those times.”
—Robert Olen Butler Winner of the Pulitzer Prize
A Good Scent from a Strange Mountain

7. You are stranded on an island with only 3 books. What are their titles?

My island companions are as follows:

Dubliners (James Joyce) I discovered James Joyce when I went to Ireland the first time in 1980. Then later I read Joyce in graduate school at UT-Dallas in 1990, beginning with Dubliners, then A Portrait of the Artist as a Young Man, then Ulysses, and concluding with Finnegans Wake—which I read twice.

Flannery O’Connor: The Complete Stories I had never read Flannery O'Connor until graduate school. My professor did his dissertation on Flannery O’Connor, and I fell in love with her writing. Who can top A Good Man Is Hard to Find?

Teaching Middle School English to a classroom of sixth and seventh-grade girls who are “Betwixt and Between”—who love both teddy bears and boyfriends—requires all the Wild Woman Archetypes she can garner.

These books and thirty-eight years in Middle School stood me in good standing when I began volunteering at the Veterans Recovery Center, an outpatient for Veterans with PTSD and other mental health issues. A Viêt-Nam Veteran Willie Minor, Jr., and I created a Vets Helping Vets Non-Profit and produced twelve ten-minute films of Veterans’ personal stories. NPR interviewed Willie and me about our Drama Therapy Program.

I’m hopeful some chocolate is included with my treasured books on my island.

8. What is your philosophy about rejection?

After papering my bathroom walls with rejection slips, I developed the philosophy of rejection that says, One door closes, and another door opens. Yin/Yang guides my life. Rejection is change: I embrace change.

Yes, I have a day job—writing. Z.O.S. is the acronym “zone of silence” that Air America and the CIA operated under; neither were “in” Southeast Asia. The acronym also reflects the are where memories stored. I write to ward off depression and PTSD. I write to understand the world, to analyze what I feel, and to record life in the “zone of silence.”

My other day job is walking and loving my Labrador Molly Bloom.

Many kudos and thanks to Writerwomyn aka Hannah Goodman for her “9 Questions”!