A few weeks ago, as I was doing a routine cleanup of my inbox, I clicked open an email from one of the many writer websites that spits out lists of the latest call for submissions. I began to do what I always do when one of these lands in my inbox—scroll and click, scroll and click. As I made my way down the list of possible places to publish my work, I also started to click and open various files in my dropbox, all the time my mind was sorting and figuring out—that piece could go there and this piece could go here…it all feels good and possible and exciting until…I finish the sorting and matching process, and I’m left with the next step: editing the pieces to fit within the guidelines of each publication.

At the first highlight and cut, I feel fine, normal, neutral. But within about ten minutes, I’m sweating and my stomach hurts. I keep going, thinking that if I work harder or faster or longer, this feeling will dissolve…Only the harder and faster I work, the worse I feel. This type of editing feels like an itch that I scratch and scratch and cannot satisfy, no matter how long or hard I edit. Soon, I’m hating the piece, hating the publication the piece is for, and hating myself.

This reminds me of the days I suffered from binge-eating disorder, the days when I felt an un-scratchable itch, an insatiable hunger, when my life felt out of control and all I longed for was to fill a desperate emptiness.

In a previous piece that was posted on The Mighty, I discussed this connection, and I also stated that I had stopped writing compulsively.

That’s not completely true. The truth is I’m trying to stop writing compulsively and like my recovery from binge-eating disorder, this process may take a very, very long time with moments of relapse.

When I received the YES from The Mighty about that piece, I was delirious. See that picture below? 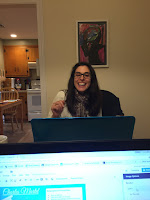 That’s me receiving the YES. Then, not more than ten minutes later, I was terrified: Would this trigger compulsive writing? After all, I definitely felt the pull and desperate itch of MORE. Of wait, if this piece got published, maybe this one that’s been sitting on my desk top will and maybe that one stuck in my works-in-progress folder can get published…Suddenly I was in a tornado of opening and closing various documents of various pieces, deleting and editing and slicing and cutting. My heart pounded and my brow was damp. 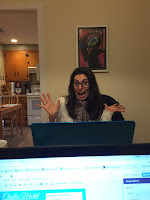 I had to catch myself, I had to yell STOP! out loud, in front of my 12-year-old daughter who sat at the dining room table watching this all.

And it reminded me of those times while I was in recovery from binge eating disorder that I would be starting to binge, I would be knee-deep in a large pile of food and my hunger meter would be tilting further and further towards full and I would have to yell STOP! and then physically stand up and walk away.

That day, a few weeks ago with my daughter when I received the first YES to a piece being published in years, that day I pushed away from the laptop and yelled STOP!, stop to the compulsivity, stop to the self-loathing, stop to the desperation of trying to fill that which really cannot be filled—at least not in that compulsive way—that day was when I made a really important pivot.

I stopped myself before it turned into a full-on writing binge.

And yes, just a few weeks ago, I started to write-binge again, but I caught myself, just as I was about to start deleting, slicing, cutting, and rewriting in that desperate rage-y way.

I don’t know what to do about these triggers I have because, just like with food, writing and publishing opportunities are EVERYWHERE. They are no longer hidden in the back of writer’s magazines or tucked into the The Writer’s Market. For me, going online is like a compulsive eater going into an enormous all-you-can-eat buffet, opportunity to binge is right there.

I guess one way is to avoid triggers, like a compulsive eater may avoid an all-you-can-eat buffet. The problem is, it is not realistic to avoid the Internet, my biggest trigger. Not to mention, avoidance wasn’t what cured me of compulsive eating. What cured me was to recognize the internal cues for hunger and for satiation, and if I wanted to eat when I wasn’t hungry, I had to learn to do something else, including tolerate the emotional discomfort of feeling instead of eating.

When I was recovering from binge eating, I had to allow myself to get hungry and in the beginning, it meant recognizing what physical hunger feels like, what were the signs? A gurgle, a hallow feeling inside, a gnawing. Then, I had to learn how to feed the hunger to satiation rather than stuffed-to-the-gills. This went on for a year or so, and as I became better at this, more space was now left in the day to feel feelings instead of eat them. This meant I also had to get better at allowing myself to feel.

What cured me too during that time was writing, writing in my journal, writing poetry, writing short stories, writing in this effortless, spontaneous over-flow of ideas and feelings way. This was authentic expression, not forced, not obsessed over, not desperate.

So now as I write this, I feel that flow, that effortlessness and I let go of compulsivity, of self-loathing, and of binging.
Posted by Hannah R. Goodman at 9:22 AM