This week’s featured author is Phoebe Darqueling from Freiburg im Breisgau, Baden-Wurttemberg, Germany and her Fantasy/Paranormal book No Rest for the Wicked: Mistress of None Book One. 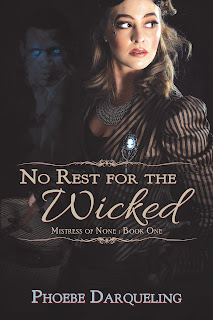 1.     What message are you hoping people will receive when they read your book? If you’ve wronged someone, it’s never too late to try to put things right. You may not succeed, but it’s still worth trying, even if it is just for your own peace of mind.

2.     Why did you write this book? I was inspired to create the character of Viola Thorne, a conwoman in the 1870s who can talk to ghosts, after working at the Sacramento History Museum. I was in training to be a tour guide for walking tours around Old Town and we had to create a character and a theme for our own flavor of the tour. After learning about the rough and tumble inhabitants of the mid to late 19th century out in California, I chose the theme “Gamblers, Grifters, and Thieves” and decided my character should be a fake medium. Not long after, I saw a little movie in mind where a woman and a man were setting up their parlor with levers and pulleys to fool their marks, and a real ghost walked in because he’d seen her ad in the paper. This scene doesn’t actually happen in No Rest for the Wicked, but it made the character real for me. I set this book many years after that scene when she’s been doing her best to avoid both ghosts and grifting for a while, but she comes out of retirement to help her friend. I also really wanted to write a book about a woman in her 30s that wasn’t a “finally finding love” romance novel. As a 34-year-old myself who has already packed a lot of experiences into my time on the planet, I knew that people my own age have really rich stories to tell. So many fantasy and sci-fi novels focus on coming of age themes and teenage protagonists, but the older I get, the less those stories interest me. Besides, don’t we “come of” every age? It’s all a process of figuring out who we are now vs. who we have been vs. who we will be no matter whether you are 16 or 116. I liked the idea of writing a character that has become jaded by her life experiences but also can’t seem to ever escape that whole pesky “hope” thing no matter how hard she tries. Older characters have a lot more room for complexity within themselves simply because they’ve had a chance to make decisions and deal with the consequences.

3.     What has been the hardest part of the publishing process? When I first conceived the Mistress of None series, I’d planned on a long series of short books more in line with the 19th-century tradition of publishing because it fits with the era of the story itself. When I submitted the original novella, the first publisher told me there wasn’t “enough” for it to feel like a complete story. So, I got a hold of some great resources like Blake Snyder’s Save the Cat! and decided to combine the first two novellas into a single novel instead. This meant more than just a quick copy and paste, I had to do a lot of rewriting to make the two parts hang together thematically, and I added a whole subplot and a new character in a late draft. So a publisher that didn’t even end up publishing my book took the time to give me some really great feedback, but it did lead to a LOT more work. In the end, I am very grateful to her though, and the finished book is much better than the original novellas.

4.     What has been the biggest (pleasant) surprise in your publishing journey? When I queried my first novel, Riftmaker, it was rejection after rejection. I had just assumed that this would also be the case with No Rest for the Wicked because that’s just how the industry works. However, it only took about 10 queries to get two offers this time. I feel like that really speaks to how much I’ve grown as a writer in between the two books. (Or maybe my query letters just got way better!) I think it proves true the idea that the best way to become a better writer is to write more.

5.     Would you write a sequel to your book? Why or why not? The original story arc covering 12 novellas has been condensed into five novels. I knew from the moment I sat down to write this book that it would be part of a series, and I really love having the kind of long-term lens for planning out the story. Vi is very closed off from sharing with other people and she is the only POV in the book, so her backstory only trickles out here and there when she is either comfortable enough or vulnerable enough to let details slip. Knowing that I can stretch the reader’s experience of discovering who she is over a larger arc makes that process really fun, and I think the air of mystery adds to the intrigue for the reader. I am also considering writing a couple of prequel books about young Vi and her experiences during the Civil War and becoming a conwoman as well. That series would be called “Jill of All Trades,” so together it would a play on the whole “Jack of all trades, master of none” saying.

6.     What author or book has influenced your writing? I always credit Neil Gaiman as my biggest influence. The scope of his imagination never ceases to amaze me, but everything about the worlds and characters he creates is also so accessible. In terms of the style of No Rest for the Wicked though, I’d say that I probably owe a lot to how much of Joss Whedon’s TV shows and movies I watch. There’s a cleverness and bouncy quality to all of his dialog that definitely influenced how I wrote Vi and her use of humor to avoid real feelings. He and Gaiman also do an amazing job of interweaving dark narratives with moments of light that I admire.

7.     You are stranded on an island with only 3 books. What are their titles? The Princess Bride, American Gods, and Hogfather

8.     What is your philosophy about rejection? This is more of my general philosophy about life, but I think it applies. The only way to guarantee failure is never to try. So try. The worst thing that happens is you end up where you started, which is exactly where you’d be if you did nothing.

9.     Do you have a day job? What is it? It’s not a day job so much as a seasonal job. My mom started a creativity competition for kids in grades 5-8 back when I was just a little bundle of joy. Nowadays, my brother, sister-in-law, and I run it together between Oct. I do all of the curriculum writing, he does the layout because of his experience working on newspapers, and she does the proofreading and communicating with parents and coaches. Writing for the program is totally different from writing fiction and has its own unique challenges. For instance, there are five competitions per year. Each one requires a set of three 10-minute problems. Trying to figure out how to create something that can be done in that timeframe but is also sufficiently fun and challenging for the kids is a real balancing act. Plus, it has to be easy for the volunteers running each event to score. Another part of the competition is that they have to put on a short play based on a prompt I create. I have a lot of fun coming up with those! I also take on editing academic papers for non-native English speakers sometimes. I lived in Sofia, Bulgaria for a year and taught English as a foreign language and I edit fiction as well, so it is a natural fit for me. After I finish this interview, I’ll be heading off to finish revising a chapter on the Parthian Empire. (Don’t worry, I’d never heard of it either before starting this assignment…) 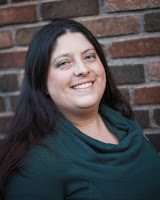 
Goodreads: https://www.goodreads.com/author/show/16821631.Phoebe_Darqueling
Posted by Hannah R. Goodman at 8:30 AM