On Closing Doors and Failed Dreams

Over the course of 16 years, I’ve tried various methods towards getting a book deal—several different agents, submitting to publishers myself, and getting an MFA. I faithfully followed all other prescribed paths, which include but are not limited to: conferences, critique groups, self-publishing, and contests.

You name it, and I did it and if you’ve been following this blog, you’ve probably read about it here.

I know what you are thinking because it’s what I thought for years when I would start saying that I was wasting my time. You’re saying, You can’t fail if you try. It’s all part of the process. Your time will come. NEVER give up. All the platitudes, all the self-affirmation, all the blind faith, all of it—every single bit of it no longer is encouraging or helpful to me. It’s become a waste of my time, time that is so very precious and so very limited.

My only New Year’s resolution this year was to let go of trying. Initially, I had two really good reasons to, at the very least, take a break. One, was my agent fired me (or we mutually parted, depends on how you look at it), and two, I was back in school and the workload was increasing exponential.

The truth was, I had wanted to quit for YEARS.

Over the final five years of my quest to become a traditionally published novelist, not only did my desire to chase the dream wan, but also another dream began to emerge. A dream that I couldn’t ignore any longer.

From the time I was in high school and probably long before then, if you talk to my middle school or grammar school friends, I wanted to be a psychotherapist. In fact, when I was in high school, I was a Natural Helper, which was this program that you were put into by your peers who would fill out anonymous surveys about who in the school they felt they could talk to about their problems. And, when I was 16 and a CIT at summer camp for creative writing, my camp friends voted me to be Most Likely To Be Psychoanalyzing Saddam Hussein on CNN. Then later, as a teacher, my students often came to me with there problems and not just the academic ones but biggies—sexual identity confusion, pregnancy, bullying.

And the whole time I took it for granted…in that I minimized its significance and my own talent for listening and helping.

The older I became and the more my tutoring business began to be successful and the more requests I received from clients to be their therapist or their child’s therapist, the more I couldn’t ignore the quiet calling I felt—to give myself over to the world of counseling. At least three or four cases a year would start off as tutoring in writing or assisting in the college application process and then quickly make a sharp turn into counseling. These clients weren’t just struggling with typical stress from life and school, but many times their struggles were with serious issues like cutting, eating disorders, and bipolar depression. Never did I make a claim to be a therapist and always did I refer people out to licensed professionals. But as these years went by and more and more people were saying, not only did they wish I were their therapist but also, when will you finally go get your license so I can refer people to you?

A year from now, I will have completed my license, and for over a year, I’ve been working in a group practice in Warwick. This dream is coming true.

Sometimes we have a desire, a passion for something, and we think that we are supposed to make it our whole life, our career. I’ve learned that there are different types of passions and some are meant to become a career and others are meant to be something else.

Teaching and counseling have always come easy to me. Writing, itself, has always come easy, too. Publishing my writing and pursuing a career as a writer has been filled with terrible struggle, like dating the wrong guy you are terribly attracted to, like a bad but electrifying romance. 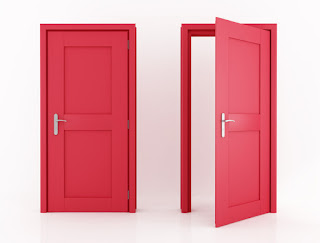 My acupuncturist described my struggle with writing and publishing like the struggle of her infertile patients…they work really hard to get pregnant, but it doesn’t happen. Then they finally let go of the struggle and hard work, and you guessed it, they get pregnant.

But not always. Sometimes they let go, don’t ever get pregnant but instead adopt or in some cases, give up and dedicate themselves to a fulfilling career or to being an awesome aunt or pet parent.

The cliché is true—when one door closes, another opens.

I love to write, but I never enjoyed publishing. It was always hard and relatively unfulfilling. It was always filled with struggle that never felt any sense of relief or satisfaction. And then it began to eat away at my love for reading and writing, that’s when I realized something was very, very wrong here.

I guess it’s how I feel about yoga. I used to be a very dedicated student of yoga, and at one time was asked to teach it. When that happened, all of the sudden I hated it, and I struggled with it. I lost that passion for it I once had. So I canceled the weekend certification course I had signed up for and told the manager at the local gym I couldn’t do it. Then I found myself back in love with yoga.

So my energy now is on finishing up course work to get my license to be a Mental Health Counselor and to open up my own small practice. I see writing as a part of the work I do, and I see myself still being a writing coach and tutor, but I see other things like teaching at a college and also supervising other emerging counselors.

We are so terrified of failure in this culture. We must succeed at every endeavor and if we stop trying or pursuing a goal, even if that goal no longer holds interest within us, we have failed and even if that failure is a blessing, we can’t see that. We see failure as weak.

***
The years pursuing becoming a novelist were not a waste—the experiences I had and the people I met along the way enriched my life and widened my perspective on myself, my writing, and the publishing world. The biggest gift was the community of people who understood the weird and terrifying life of being a writer and it was awesome to feel so understood.

The waste was the beating myself up when I got to a point where I didn’t want to do it any more but felt I should. After about 8 years of trying to get several novels traditionally published, I was exhausted and really wanted to stop the submissions game. Not only had I been pursuing that, but I also had self-published three novels that actually were pretty well-received. So, I thought the best place to “rest” was an MFA program, which, truthfully, I feel, saved my sanity. I left my then-agent and spent the next two years in a cocoon of a writing community and didn’t worry about agents or publishing.

The desire to stop happened gradually, rather than all at once. There was a period of time after I completed my MFA where I had this manic surge of energy to get back out and try again. But this time it was not about loving writing or even believing in my work, but it was more of anger like, fuck you, I ‘m gonna show you whose boss.

I created Sucker Literary and it was a labor of love and it was my fuck you to publishing (think about the name, after all). Then I had two giant strokes of good luck…getting featured in Publishers Weekly and signing with a new agent who had sought me out. Yet, my gut, the entire time, was telling me something was off. But I surged forward in this angry and frantic state and spent the next five years in misery, which was funny because in many ways I almost had everything I had dreamed of having…and the goal of published novelist seemed within my grasp.

Hindsight is not necessarily 20-20. Meaning, I could look back and say, well, that’s why ultimately my novels never got picked up…because my heart center wasn’t in the writing I was doing. But I don’t believe that is why my novels didn’t get picked up. Plenty of people have their novels published that are formulaic and not from their purpose place or heart center. So when I look back, I don’t know why those manuscripts never got published, but I can say now that I’m sort of glad they didn’t. Because I wasn’t happy writing them. I felt a sense of disconnect and fear. It’s scary to admit that I spent about 5 years doing something I really hated, especially when it was once something I loved.

Don’t get me wrong. I still love to write. Fortunately, that never wavered during this time period. What I don’t like is writing out of a fear of failure, writing to prove something to someone…someone I don’t even know and haven’t even met.

And I don’t hate publishing. I just don’t like the game of it. Never been a good game player. That’s why, right now, I’m not playing the game. I’m not looking for an agent or a publisher. But I’m writing. I will always be writing. And publishing, I’ll always be doing that, too.