It's been 194 days since I published on this blog. Mainly because I wasn't sure what the point of this was anymore. I had developed this new project called All The Way YA, where I could channel all of my writer's rage, sadness, frustration, aggravation, jealousy, and anxiety. And, since misery adores company, I recruited as many folks as I could to join the venting sessions.

Not everything on All The Way is a venting session...but not gonna lie, I did create it to have a place to go with all this SHIT that comes with being an artist.

However, I do hold back and censor myself there because the point of that blog is more of sharing information, tips, and experiences...rather than ranting and raving and stomping my feet. Which I plan on doing more of on here.

And now that I am 40 YEARS OLD ( I made it, by the way), my credo is to be more like the womyn-folk I admire: Madonna, Amy Schumer, Tina Fey, Amy Poehler, Hillary Clinton, Rosie O'Donnell, Jane Fonda, Lily Tomlin, and Barbara Walters. They each have traits that I want to embrace more of in myself:

Madonna doesn't care about age. She is the epitome of irony and is always misunderstood. She'll dress like it's still 1983 and her ass actually looks better now than it did then. And, she'll tongue kiss a kid who could very well be her grandchild. I have zero interest in the latter, but you get the idea.

Amy Schumer doesn't give a fuck who she upsets when she tells the truth about the way women, historically, have been depicted in the media. Yep, I'm saying "fuck" on this blog now. Sorry-not-sorry. Blame Amy, she's the reason why.

Tina Fey and Amy Poehler are besties and yet supportive and not jealous bitches to each other. Word.

Hillary is just a badass (yet classy) bitch in a man's world. Go, Hilary. GO!

Rosie keeps trying in her relationships and in her career to reinvent herself...all while maintaining who and what she is. And she's friggin' funny and is a mom who GETS IT. She's a humanitarian and not all preachy about it. I love her.

Jane and Lily have taught me that age is truly just a number with a bunch of stereotypes and judgements attached to it. Not to mention they defy the definition of "old lady" and I want to be both of them, at the same time, when I grow up.

And then there is Barbara...she is a pioneer who, like Hillary, was a (classy) badass bitch in an a man's world, and she changed that world. Now Hillary has to do the same.

So, the point right now of this post is to tell you I'm back to blogging...if anyone out there is listening...and this time, I'm not holding back. My new commitment to my writing is BE MORE ME. Write more of what feels good to me, personally. Have writing be less hard. Make writing's value be less attached to publishing success or failure. Make writing be what it once was to me...before I made publishing the arbiter of my self-worth.


My Birthday Dinner, sash and crown courtesy of my awesome husband. 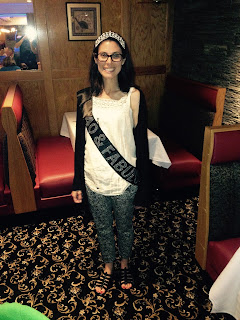 My husband had this made for me because he says I'm his unicorn. 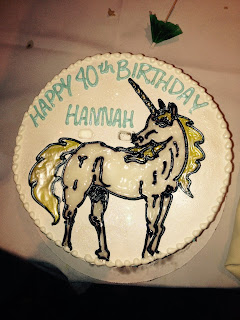 Oldest daughter made the appropriate card for me. 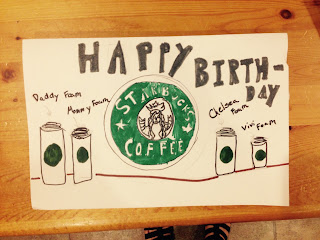 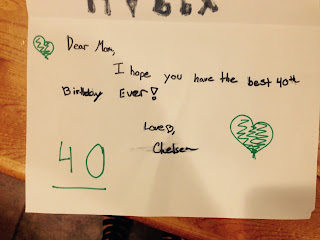 Youngest appropriated the crown from me. 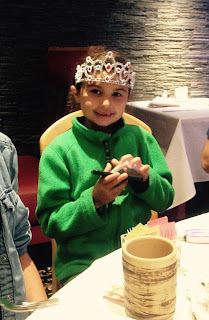