Reflection on: Friendship over Forty

This is my first post in a long time. I've been reflecting a lot about my writing and trying to be more open and exploratory in what topics interest me. Friendship is something I've wanted to write about for a long time. In fact, this piece has been in the making for almost a year. I finally feel like it is complete but was hesitant to post it right now due to the state of the world with the coronavirus. I wondered if this was significant enough in light of what we are all facing...but then I remembered that we will go back to regular life at some point and this will be an important and timeless topic. So I give you my reflection on friendship after forty...


In early 2014, I had a pretty bad battle with depression and anxiety—kind of an early-ish, midlife crisis. It took a year of intense therapy and excellent self-care to feel like myself again. Then, early 2016, during a routine colonoscopy (I started getting them in my late twenties because of family history), my gastroenterologist found a large tumor that had to be removed with abdominal surgery.

During that two-year period of being sick (first mentally and then physically), I was forced to (re)examine my life. I had to determine what would help me recover and stay well and what wouldn’t. What I discovered is that I had some friends in my life who weren’t helping me heal. In fact, they were draining my energy. When you are not well yourself, it’s very hard to tolerate those types of relationships. So, I started to say "no" more and more to those people. Eventually, over a long period of time, they faded from my life.

There were moments before I completely cut them out that I wanted to tell them how I felt, and I sat with those moments, really wondering what would be the reason for telling them my feelings. Guilt was the only motivation. There are a lot of emotions and feelings that may motivate friendships, but guilt shouldn’t be at the top of that list. I knew then that it would be cruel to offer them reasons or explanations because the implication of that is that I would want to save the friendship, and I knew that I didn’t.

In doing this, I found myself with a handful of people who I really enjoyed. I felt content and happy with that part of my life for many years. And then, a few years ago…two of them shut me out. No official goodbye. They just stopped messaging me and making plans. I did ask them each if I had done something to make them upset and both said no.

With those two people, initially, when I realized that they were ghosting me, I was hurt. Over time, I began to realize that if they didn’t want to tell me why they no longer wanted to be friends, and I did ask, what more could I do?

Younger me would have obsessed over that and wrote long letters/emails of apology, even if I didn’t know what I did. When relationships ended, I always assigned the fault and blame to myself.

When I was in middle school and high school and would have some kind of girl-fight-drama, my mother always took the opposing team’s side. “Oh, so-and-so has such a tough home life you know…Well, so-and-so just says that to you because she’s jealous…Well, maybe you said something that upset so-and-so…” These were most of the types of responses I would get when I would complain that someone wasn’t being nice to me or leaving me out. Over time, the message I got was, whatever happens, it’s my fault and/or I should tolerate it because so-and-so has it worse than I do.

I also got the message from my older sister, too, that if my friendships weren’t good, it was my fault. I remember when I was a freshman in high school, after going through a really big break up with my first real boyfriend and gaining a lot of weight, my big group of friends iced me out. “You need to lose weight and get your friends back,” is what my sister told me. Then she added that she thought I had pushed my friends away, not the other way around.

Let me say this, my sister wasn’t entirely wrong. At all. But that’s not the point. The point is that as MY sister, I wanted her validation and love. I wanted her to help me figure out on my own what to do. The way she jumped right into problem-solving mode was definitely well-intended, but it missed the mark. Unfortunately, it sent the message that my hurt, my pain, what I felt my friends had done to me to cause me to move away didn’t matter.

The message I got is that if someone isn’t treating me kindly if someone is excluding me or rejecting me, I’m the reason why—me—and it’s up to me to change and adjust so that I can gain that person’s affection back.

***
After years of being in therapy and then becoming a counselor, I understand that mothers/fathers and big sisters/brothers often take the other person’s side, so-to-speak.  In many cases, they do it because they think they are shielding you from hurt, shame, or embarrassment. To them, they are protecting you because they love you. In the short term, immediately taking responsibility for the demise of a friendship, immediately apologizing or accepting blame, will probably get you back in the good graces of the friend who shut you out, but in the long term, the message you are sending yourself is that your voice, your feelings, your hurt matters less, if at all, and it is this message that can lead to depression and anxiety over time.

What would have happened if my mom had said to me, “Wow, that sucks. How do you feel? What’s going on for you with this?” And then what if she stepped back and let me work through the whole thing on my own, make my own mistakes and call my own shots based on myself and who I am. Maybe, just maybe, I was someone who didn’t want to go along with the crowd and tolerate the kind of peer pressure and judgment that those groups of friends operated under (they were the drinking/popular crowd). Maybe I would have rather been alone than be with people I no longer felt connected to. Imagine if I was empowered to be able to listen to my own instincts and my own inner voice that was telling me it’s time to move on from those people…so you can find new people who match more with who you are now.

The transition from middle to high school was hard for me because the crowd I ran with began to do things in high school I wasn’t ready to do. I felt like we no longer had anything in common. I was going through my own hard time with an eating disorder and a bad experience with a boy and what I needed my old friends couldn’t give and, frankly, didn’t want to. Looking back, I get it and I get why they essentially pushed me out and it’s okay…but back then, it wasn’t okay for my mom or sister to point the finger of blame back at me. They couldn’t tolerate my sadness and pain at the breakup of the friendships, and so instead of supporting me as I grieved and moved forward from it, they tried to make me stay.

And because I trusted my big sister and my mom, I felt wrong and guilty that I couldn’t “lose weight and make up with my friends” as my sister put it. I felt shame that the truth was I was glad my friendships with them were over because I’d outgrown them and they had outgrown me. If I had just grieved and gone through that part, high school would have been less of a struggle. Instead, I battled my inner voice against the voices of my mom and sister—both of whom I really trusted.

As I got older and moved away from listening to them and more to myself, I realized that instead of, as my sister once put it, "cycling through friends",  what I was doing was allowing friendships that were no longer working to fade away. Friendships I made in college lasted a long time while we were all facing similar life stages and then when my life went in a different direction, those friendships faded out. I stayed close with most of them for 10-plus years. Friendships I made through my first and second jobs were situational, and as I got married and had children, again my life changed and so did those friendships.

Now I have had the same best friend since we met when our oldest children were less than two-years-old (14 years ago). This is an unwavering friendship that is rare because we’ve grown and changed individually but none of that has been problematic in our friendship. While my closest friendships are less than I can count on one hand, people I talk to and socialize with regularly, I do have a network of what I call mom-friends. These are people I know through my children, and while I do enjoy their company, due to time and circumstance, I don't socialize with them outside of kid-related activities. I have the dance-moms and then the school-moms...we all can relate, at the very least, through the trials and tribulations of what our kids are all going through. We may not see each other all the time, but we've known each other for years and can connect immediately over dance recital rehearsal weekends, band concerts, or just the few minutes when we drop our kids off at each other's respective homes for hangouts.

The benefit of being this age is that I realize that we really only need a few close friends. Having one or two best friends, I can give to them the way I want to—if one bestie needs me to pick her kid up from school or the other is having a work-related crisis and needs an ear, I'm right there. If I had a large group of friends, I wouldn't even have time to devote to them and that would cause me a lot of grief. Not only that, but I’m also a person who likes depth in a close relationship. If it’s not real and authentic, if we can’t have a reciprocal vulnerability, then we aren’t a match. If you need me to call and text you several times a day, we shouldn’t be friends. If you want to do a “girls’ night” with fifty other women, I’ll have to pass. But, if your idea of the perfect friend-date is to meet at a coffee shop and talk about our lives, I’m your girl.

***
Recently, both of the women who ghosted me a few years ago re-emerged—one sent me a text and the other I ran into when I was out and about in town. Both acted like there hadn't been a long period of ghosting but neither really made an effort to re-establish anything. While this would have reopened wounds if I were younger, instead it simply reaffirmed to me that it is truly best to let friendships fade when they no longer seem to be working. As the saying goes: "people come into your life for a reason, a season, or a lifetime". 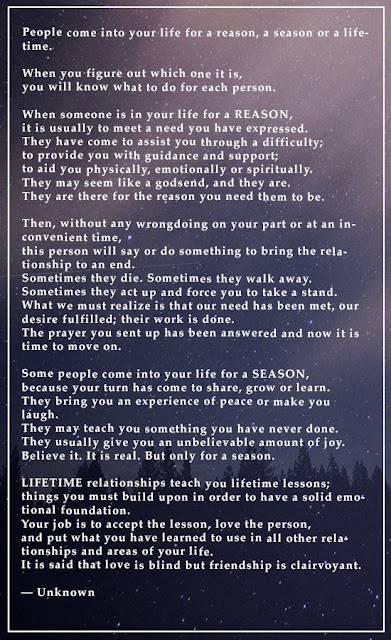