This week's featured author is Joseph Carrabis from Nashua, NH and his sci-fi thriller The Augmented Man. 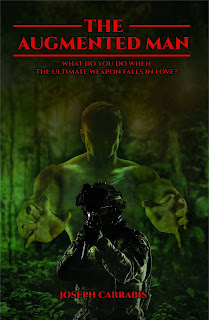 The Augmented Man
By Joseph Carrabis

1.     What message are you hoping people will receive when they read your book?

I’m hoping people will receive the message “Buy all of Joseph Carrabis’ books.” Beyond that? That people can heal and healing requires effort. People have to make a decision to get well and then make getting well more important than air, food, and water. You can’t be free of your past unless you’re willing to embrace it. Embrace it, acknowledge it, accept it, then you can move on from it.
2. Why did you write this book?

The concept is a simple one, and I’m surprised by people’s reactions to it; the majority of first and ARC readers tell me it’s fascinating, powerfully disturbing, well written (I hope so! After all the editing we did?), and innovative beyond imagination. That noted, I wrote it simply because I could, because I lived through most if not all of it - I always tell people my work is autobiographical. All authors write an autobiography, some admit to it - because (I hope) it explains to those in the kinds of pain described a way out (I’ve been told the middle section reads like a psychotherapeutic case study).

3.     What has been the hardest part of the publishing process?

Patience. I wrote the story in the early 1990s.

4.     What has been the biggest (pleasant) surprise in your publishing journey?

Hmm...probably realizing I really can write, really can tell a good story.

5.     Give some advice to someone who wants to get a book published.

First, if you want to be published in today’s world and are not published, you simply don’t want to be published. People can self-publish and most do (unfortunately, me thinks (and I self-pubbed two books, although not for the reasons most people go that route)). There are also lots of “indie” publishers which are just people in the basement wanting to look impressive - be careful. Remember, it’s your work, not theirs (I had one publisher threaten me during a video call if I didn’t give him the book. Fascinating experience). Also, I know a fellow who’s “still deciding” whether or not to self-publish or seek a publisher after some thirty years. His real problem is that his work sucks; sucked back then and sucks now. I suspect he knows it and that has more to do with his not deciding than anything else. Perhaps he’s afraid to find out the truth? But that’s another thing that’s necessary: Be willing to be uncomfortable. The only way I’d learn if I could really tell a story worth reading was by sending it out, again and again and again. In the early 1990s, nobody was interested. The publishing world changed. This time I had several offers (hence patience). If you want your work to be published, be willing to have your work rejected. Note the emphasis. People’s likes and dislikes are always subjective. Editors and publishers may know what’s selling and have an idea of what will sell, your work may be a perfect fit, but they don’t like your protagonist so they reject your work. Their loss, not yours. Move on.

6.     What’s the worst advice you have ever received about publishing?

“You’ll be sorry if you don’t let us publish this book.” Another gem was “It doesn’t matter how you wrote it, we’re going to change all your colons and semicolons into emdashes.” A basic rule I have is “If the information isn’t geared towards making the work better, it’s worthless.” This is based on the axiom “Criticism without suggestion is worthless.” My suggestion regarding any advice - good or bad - is “Thank them first, then decide if the advice gets you closer to your goal. If yes, act on it. If no, move on.”

7.     What author or book has influenced your writing?

How long a list would you like? AJ Budrys, Katherine Mansfield, Wells, Doc Smith, Homer, Lucien, The Grimm Brothers (original stories), Virginia Woolfe, Poe, Shelley, Dick, Wouk, ... ancients through the 1960s, from all cultures. Craig Johnson’s Longmire series until the last one (“Winter” something. He was writing literal poetry until that one. No idea what happened), Leonard, and we haven’t even gotten to the poets. Oy, the poets! Dickey, Giovanni, Hall, ... Western (culture) genre writing tends to peter out once you get into the 2000s.

8.     What is your philosophy about rejection?

Move on. If there are suggestions, decide if they move you closer to your goal. If yes, act on them. If no, move on.

9.     You are stranded on an island with only 3 books. What are their titles?